Montenegro – The Queen of Summer Festivals 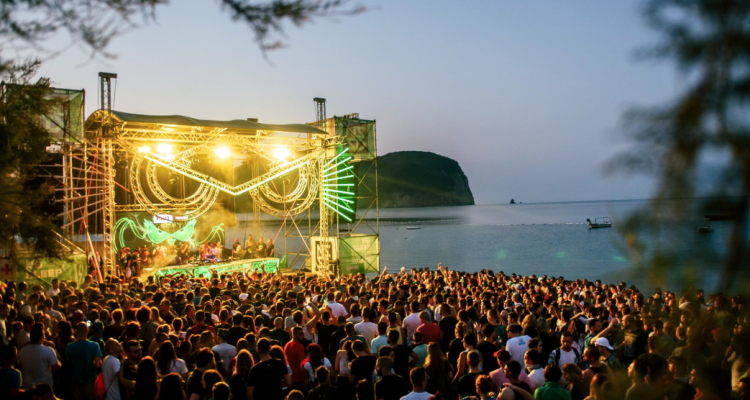 As well as being known for having some of the most beautiful scenery in the world, which includes the Mountainous backdrop, the national forests & the sandy beaches, Montenegro is also packed full of culture, history and its Summer Festivals which are becoming increasingly popular with tourists from across the European continent and beyond.

Whether you are a fan of Jazz, Funk, Disco, Soul, Electronic, rock or Pop there is something for everyone, and there’s plenty of time to take in the sights of this beautiful country whilst you are here too.

Here’s a brief synopsis of the Festivals during June – August.

City Groove – June
To celebrate the start of Summer this festival takes place in the Capital – Podgorica, and is three days’ worth of Pop, Rock & Electronic music from the Balkan region & across Europe. It takes place in one of the larger stadiums and is known for it’s energetic crowd. It also prides itself on being a ‘green & environmentally friendly’ festival, raising awareness of climate issues & climate change.

Udahni Kolasin – July
Sitting around 1000m above sea level and offering amazing views over the local area this is a music, art and culture festival, which is popular with both the locals and tourists alike. It’s particularly popular with visitors as they can explore the local countryside which includes the historical sites & the gorgeous National Park.

Fascinada – July
This is by far Montenegro’s oldest festival which dates back around 500 years and has been a tradition ever since. Located in the town of Perast it celebrates the building of the man-made Island which is just a short distance from the coast & houses the church of the Lady of the Rocks.
On the 22nd of July, local boatmen along with a group of Accapella singers make their way to the Island and once there, they throw rocks into the sea which symbolises the power that the Island has over the ocean. It’s definitely a site to watch, and is rather inspiring!

Sea Dance Festival – August
This is by far the most popular Festival in Montenegro as it takes place in the stunning town of Budva and attracts over 80,000 people from all over the world. A three day festival, it’s previously hosted huge names including The Prodigy, John Newman, Sean Paul and Fatboy Slim. Usually, it hosts an impressive 100 performers, and with the shoreline of the Adriatic for it’s backdrop, it’s a spectacle to behold, especially just as the sun is setting!

Bokeljska Noc – August
‘Boka Night’ is a ‘one evening’ festival which dates back hundreds of years, but has kept to this day and gains in popularity every single year. Celebrating the sea starts with the boats sailing along the coast, continues with an open air concert near the old town, and ends with a grand party & fireworks. It goes on until the sun rises, and there are prizes for the best designed boats & floats!

Montenegro Film Festival - August
See – we told you there was something for everyone. This festival takes place in Herceg Novi, and more specifically in the old fortress which overlooks the Bay of Kotor. It’s a slightly more modern festival than some of the others mentioned above, but it’s still a fantastic event showing some of the best and most cutting edge films and documentaries from all over the world.

Lake Fest – August
Lake Fest exists to essentially promote urban culture & music whilst also having the second task of educating people about tourism & ecology, and the partnership between the two. Taking place on Lake Krupac, it attracts over 20,000 people annually and typically hosts more local bands from Montenegro and surrounding neighbours. Festival-goers can even camp for free in the local forest and organizers ensure it’s eco-friendly by providing clean up operations and eco-workshops.

Bedem Fest – August
Probably the most well known Festival in Montenegro, it takes place in the city of Niksic at the fortress of the old Ottoman Empire. It tends to focus on Alternative Rock Music and attracts visitors from all over the world who want to see the sites, listens to the artists on offer and experience the delicious range of food on offer. Festival-goers can even decide to pitch a tent at the bottom of the fortress if they choose to stay a while!

There is really is so much on offer here… we can’t wait for you to experience it, and of course, if you need any further information on the festivals, things to see and do, or indeed buying property in Montenegro, then please do have a chat with us (CMM Real Estate Montenegro), and we will be more than happy to help!